Samburu: A Place of Special Species

“We’re already going to Amboseli for the views of Kilimanjaro and the great numbers of elephants, and to 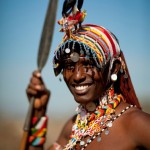 the Masai Mara to see the big cats and predators, possibly the migrating herds crossing the Mara River, and a hot air balloon flight over the plains. Why would we also include Samburu National Reserve on our trip to Kenya?” asked a client earlier this week.
Well – for one thing the Samburu. The Samburu people, that is. They own most of the land around the park, and they are the ones who will teach your children how to brush their teeth with a twig from the right type of tree, carve bows and arrows, or identify the tiny prints of a dik-dik in the sand. Trips to the local Samburu markets (usually on Wednesdays and Thursdays) are always a treat. They offer a rare opportunity to see the art and beauty of the Samburu culture through their jewelry and clothing in a perfectly authentic setting.
Situated alongsid 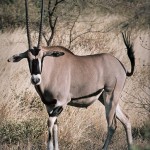 e the Ewaso Nyiro River, there is typically enough water to attract wildlife from the surrounding savannah plains, and Samburu has become know for it’s own collection of unique and rare inhabitants: The Samburu Special Five.
The Beisa Oryx are beautiful large, non-jumping antelopes. Their grey coats are almost “artistically” embellished with a white underside, separated from the grey by a stripe of black, more black stripes where the head attaches to the neck, along the nose and from the eye to the mouth and on the forehead. Their elegant horns are thin and straight and grow up to 3 feet long. 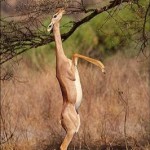 The word Gerenuk comes from the Somali language, meaning “giraffe-necked”, Gerenuks eat tender leaves and shoots of prickly bushes and trees from higher places than most other gazelles and antelopes by standing up on their hind legs, and stretching out their long necks. It is quite a sight to behold. Gerenuks rarely drink water, because they get enough from the plants they eat, which allows them to skip the dangerous waterhole-routine at sunset, and survive in their dry habitat. 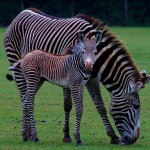 Grevy’s Zebras are also known as the Imperial Zebra. They are taller, have larger ears and narrower stripes than other kinds of zebras, and while they once ranged through most of Kenya, Eritrea, Ethiopia and Somalia, today they are an endangered species of roughly 2,500 living in the wild and confined mostly to this part of northern Kenya. 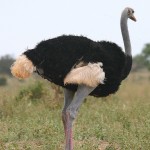 The Somali Ostrich looks a lot like other ostriches, but the skin on their necks and thighs is grey-blue (not pink). The males’ becoming bright blue during the mating season.  Unlike other ostriches, the Somali do not like open plains, but prefer bush and scrubland where they live solitary or in pairs. 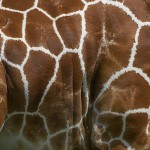 Reticulated giraffe are also known as Somali giraffe, but most noted for their beautiful and distinctive pattern: large, deep red polygonal patches are outlined sharply by bright white lines.
I know what you’re thinking:  a giraffe is a giraffe is a giraffe, and a zebra is a zebra is a zebra right? But take it from me, you will surprise yourself to find how exciting it is when you start noticing these types of distinctions, so to complete your collection with pictures of these peculiar creatures…. go to Samburu!