5 Reasons to Go on Safari During the "Green Season" 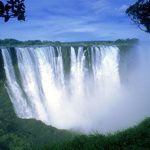 December through March is the normal “rainy season” for southern Africa. This period is known as the “Emerald” or “Green” season. With a current South African Airways sale going on, there isn’t a better time to book a trip to the region! Trees are in full blooming glory and the birds are simply spectacular. Many species have their babies this time of year, and our clients enjoy watching tiny zebra, warthogs and elephants on their safaris. The little ones attract their fair share of predators offering some amazing action scenes that will stay with you for life. The rains may bring cooler weather and dramatic skies, but don’t worry, it never rains for very long. You’ll still have plenty of sunshine every day and you’ll enjoy it all without the crowds and at discounted prices. Read on to find out why the “Green Season” is secretly our favorite season to go on safari … and book your own green season safari with us now!

Benefits of Going on safari During the “Green Season”