What are the Big 5 and where can I see them?

The Big 5 is a term originally coined by hunters to describe the animals they found the most dangerous to hunt on foot – namely, lion, leopard, elephant, Cape buffalo and rhino. Depending on where you travel on safari, you can reasonably expect to see all five – with rhino and leopard being somewhat more of a challenge – but some of our clients have a passion for one animal in particular, so we’ve recommended the best places for each. 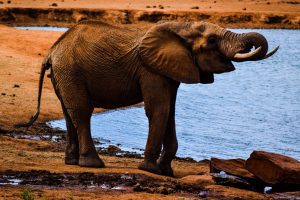 It’s true that elephants have phenomenal memories, and they are also highly intelligent, empathetic and co-operative. As they consume a diverse range of vegetation, African elephants can survive in a variety of habitats across the continent – grasslands, savannah, forest, swamp. Females live in herds headed by a matriarch, and babies are raised and protected by the group. By the age of 10-12 the young males will leave to live on their own or in groups with other males.
As the largest land animal in the world – they can weigh up to ten tons – adult elephants typically eat 300-400 lbs of plant material a day. While they have no natural predators (although lions may try to hunt babies) in order to find sufficient food and water they need to roam far and wide, which has put them into conflict with humans. They are relentlessly poached for their ivory tusks (all African elephants, both male and female, have tusks).
Where to see elephants: Head to Botswana if you’re passionate about elephants – in particular Chobe National Park (especially the Savute and Linyanti areas) and the Okavango Delta. In Tanzania, Tarangire National Park; in Zambia, South Luangwa National Park; in Zimbabwe, Hwange National Park and in South Africa, Kruger or Addo Elephant Park. If you’re in Kenya, Amboseli National Park is known for its concentration of elephants. An added plus: you can schedule in a visit to the David Sheldrick Wildlife Trust in Nairobi, where you can meet the orphaned baby elephants that are hand-reared around the clock before being released back into the wild. 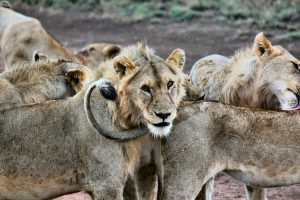 Lions once roamed pretty much the whole world – the only continents they didn’t live in were Australia and Antarctica – but have gradually become extinct everywhere but sub-Saharan Africa. Now, over 80% live in East and southern Africa, with the highest concentration in Tanzania. Like all the Big Five they are threatened, again largely due to a loss of habitat due to conflict with humans.
Lions are the only cats that live in groups, and a pride usually consists of a few adult males, related females and cubs. Lionesses rarely leave the pride they were born in, but young males leave at about three years of age – although their chances of survival aren’t great; only about one in seven will manage to take over another group headed by another male. Lions can spend up to 20 hours a day sleeping and are most active at night. The females famously do most of the work when it comes to hunting, and work in groups to bring down prey – antelopes, buffalo, zebra, giraffe. Lions do actually live up to their moniker as “King of the Jungle” (although it would be more accurate to call them “King of Beasts”), not only because they are at the top of the food chain. Research has shown that they only co-operate in a group in order to defend themselves against other prides – ruling the savannah is their ultimate aim.
Where to see lions: Kenya’s most famous reserve, The Maasai Mara, and Kruger National Park in South Africa. South Luangwa National Park in Zambia if you fancy the thrill of seeing a lion on a walking safari. Although lions don’t like water, they are found in the Okavango Delta due to the proliferation of buffalo in the area and are adapted to hunt during the day, making them easier to observe in action. Another place you may not expect to see lions are on the Skeleton Coast in Namibia. These desert-adapted lions have been known to eat sea lions and whales washed up on the shore, but the chance you’ll manage to see one is slim. 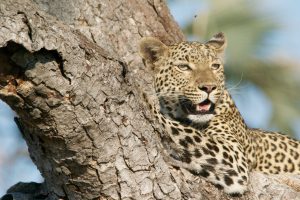 Beautifully camouflaged and famously elusive, leopards spend much of their time in trees, even hauling their prey up into the branches to keep it safe from other animals. They are nocturnal and solitary, although when a female has cubs (usually two to three at a time) she will stay with them for about two years.
Leopards can survive in a wide variety of terrain and are found in parts of Asia and across sub-Saharan Africa. Perhaps surprisingly, they are good swimmers, catching fish and crabs, although they don’t need to drink water as they get enough hydration from their food.
Where to see leopards: Probably the best place is South Luangwa Valley in central Zambia – not only is there a high concentration of leopards, but the night drives are allowed here, increasing your odds. Also top of the list is the private Londolozi Game Reserve in the Kruger National Park. The Serengeti in Tanzania and the Maasai Mara in Kenya are also good options, as is Lake Nakuru National Park in Kenya – there are less lions here so leopards have an advantage when it comes to hunting. 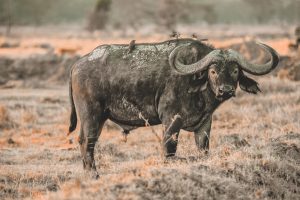 Cape buffalo thrive in all types of grassland across sub-Saharan Africa, as long as they have regular access to water. You’re almost certain to see them on safari, and for that reason they are often overlooked – but large herds are pretty dramatic, and their interactions can be fascinating to observe. They are feared for good reason: not only is a Cape buffalo four times stronger than an ox, but it will often circle back and counter-attack if it’s being hunted. They also have exceptionally good memories and have been known to seek revenge years after they have been harmed.
Cape buffalo live in large herds according to a strict dominant male hierarchy that is often established by fearsome fights – it can take a male eight years to work his way up to a position where he is able to mate with a female. Those at the top have the advantage of traveling front of the herd, which offers the most protection and first option on grazing. Herds tend to be placid, but they will co-operate to defend a member; lone males are the most bad-tempered and dangerous.
Where to see Cape buffaloes: Katavi National Park in western Tanzania comes top of the list due to the large herd sizes found here – some number up to 3,000 individuals. Plenty of lion-buffalo skirmishes occur at Duba Plains in Botswana, and as the lions hunt during the day you’ve got a high chance of being able to be a spectator. Other good places: the Maasai Mara, Serengeti, Kruger and South Luangwa. 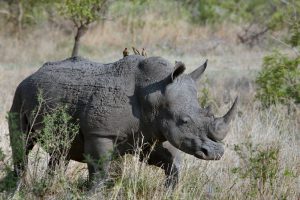 Rhino once roamed Eurasia and Africa in large numbers, but they are now critically endangered – poachers fetch high prices for their horns as they are used in Chinese medicine, and as they are dispersed in small groups it’s difficult for them to breed successfully. There are two species of rhino in South Africa, the black and white, and the northern white rhino is considered extinct after the last male in the world, Sudan, died in March this year, leaving only two females left.
In the wild, rhinos have no natural predators. They tend to be solitary, except for white rhinos, where females live with their offspring in groups that are called crashes. Males and females fight during courtship and can badly injure one another; offspring are born after 15-16 months and after about three years the calf will set out on his or her own. They spend the majority of their time grazing or wallowing in the mud as this keeps them cool and protects them from the sun and parasites.
Where to see rhinos: Many reserves don’t like to publicize their rhino populations for fear poaching. The last two surviving female northern white rhinos, a mother and daughter pair, are under 24-hour armed guard at Ol Pejeta Conservancy in Kenya, which also has East Africa’s largest black rhino population and a significant amount of white rhino. Hluhluwe–Imfolozi Park and Kruger National Park in South Africa are good options, and Etosha National Park has waterholes where you can watch the rhinos at night. Another recommendation is Lewa Wildife Conservancy in Kenya and at Pamushana in the Malilangwe Private Reserve of Zimbabwe.
The Big Five are by no means all you’ll see on safari, though – cheetah, wild dog, giraffe and hippo are just as fascinating… and how about the Little Five and the Fun Five?